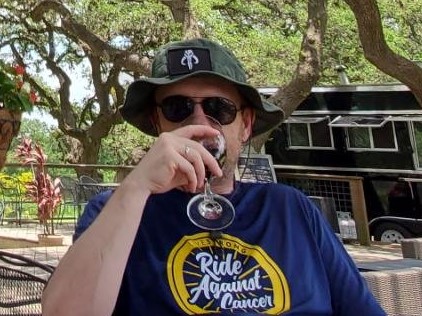 A few years ago, when my daughter was 8, we all decided she was ready for the responsiblity of being a pet owner. I bought her a 6 gallon tank, some basic plastic decorations and a beta. Sadly, the beta only lasted a few months.

My wife convinced us to get some mollies and guppies. We did. But my daughter didn’t consider it ‘hers’ anymore. So all the feeding and tank-cleaning responsibilities fell to me.

The other day, the heater broke. While shopping for a replacement, I got the urge. Since this was ‘my’ tank now and I was doing all the work, why not really make it mine?

I knew I wanted a planted aquarium. I also knew I didn’t want to go so big as to require a canister filter or CO2 tank. I decided I could probably do something nice with a 10 gallon tank. I bought the tank and, while at Petco, a nice piece of driftwood caught my eye. I also decided that I didn’t want to use the same ugly gravel we used in the other tank and instead got a big bag of Fluval Stratum substrate. I had planned to go with the Fluval U2 Underwater Filter. But, again while at Petco, I spotted a Fluval-20 Hanging Filter, which looks nearly identical to this AquaClear filter.

I got online and found Scape-It, which allowed me to play around with different looks. I already had some rocks, and now the driftwood, so all that was left was to pick some plants and decide where to put them. Here’s what I came up with. Note that I was purely going by what I thought looked cool with no real attention paid to what the plants actually were.

I rinsed the Fluval Stratum and dumped it in the tank. Then I filled the tank with about 2” of water. I placed my rocks and driftwood, then topped off the tank. It was a cloudy mess. 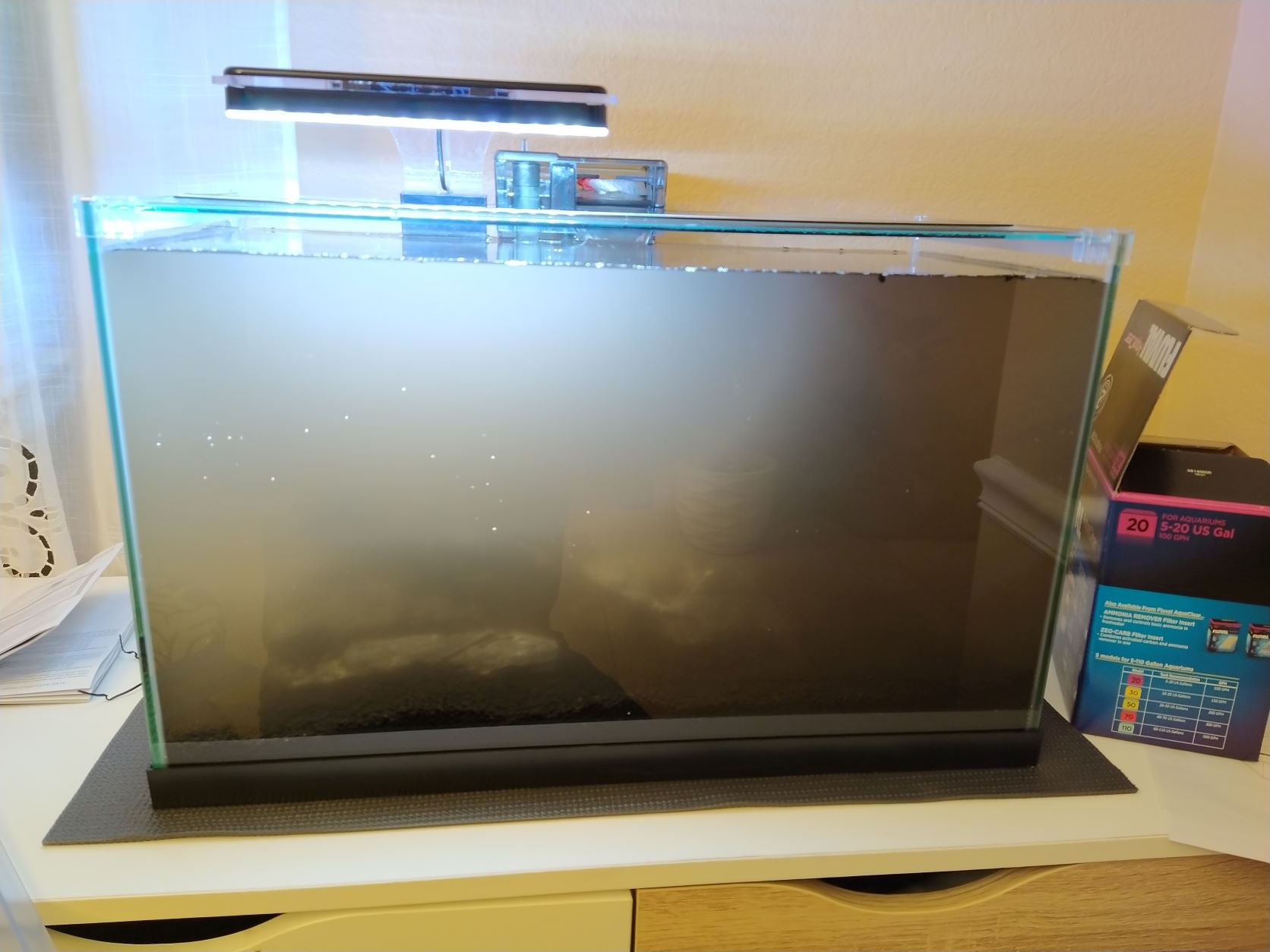 I let the filter do its thing for about 24 hours. The result… looking a little better.

Oh, the new light arrived too. 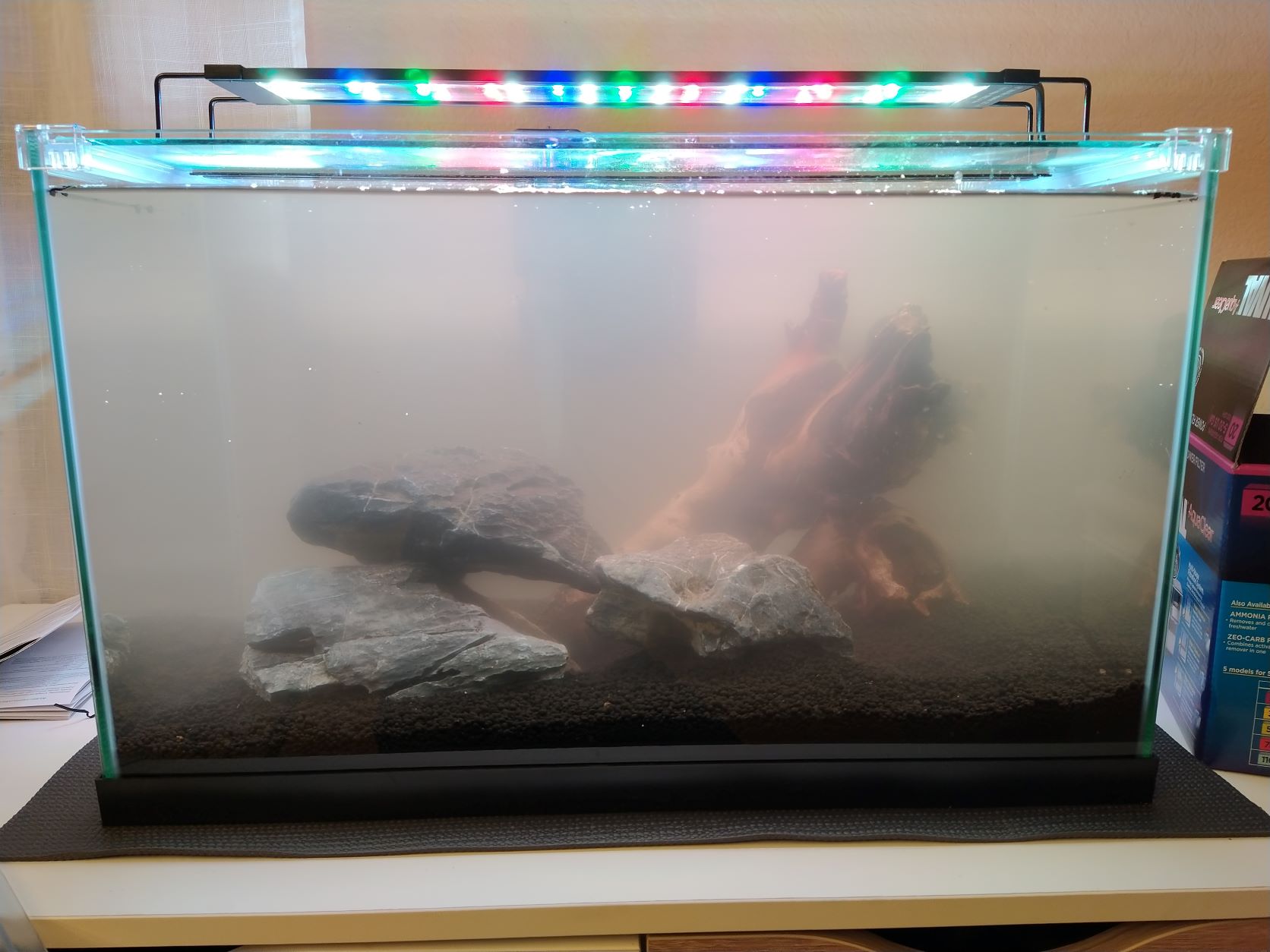 Thinking I was ready for plants, I went back to Petco and picked up a bunch of what looked close to what I envisioned in ‘the Plan’. I came home and realized it was going to be a pain to plant with the tank full of water. So I drained it, re-arranged the rocks and driftwood, then planted… mostly sticking to ‘the Plan’.

Here’s an inventory of what I ended up with:

I filled the tank and here’s the result. 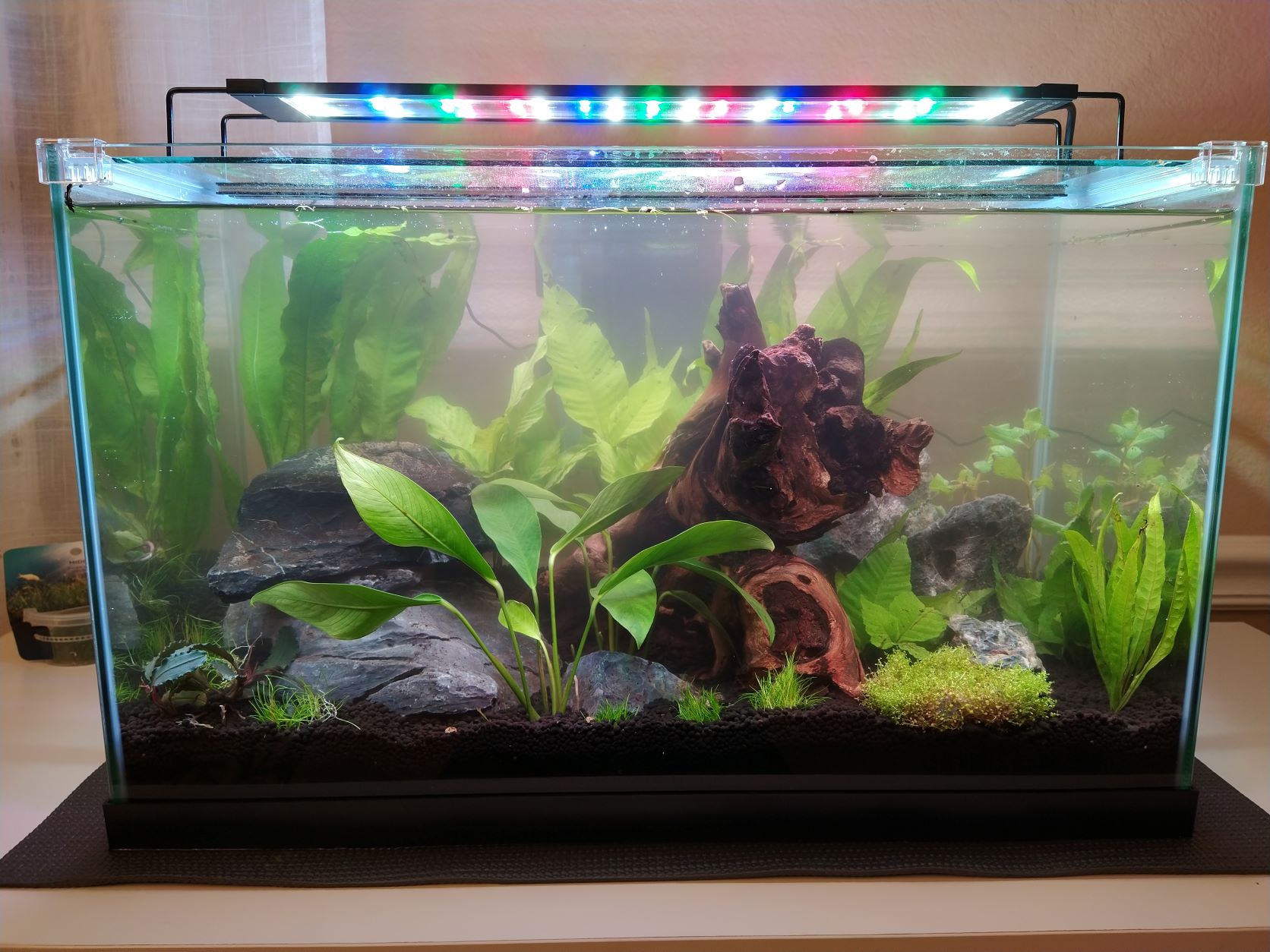 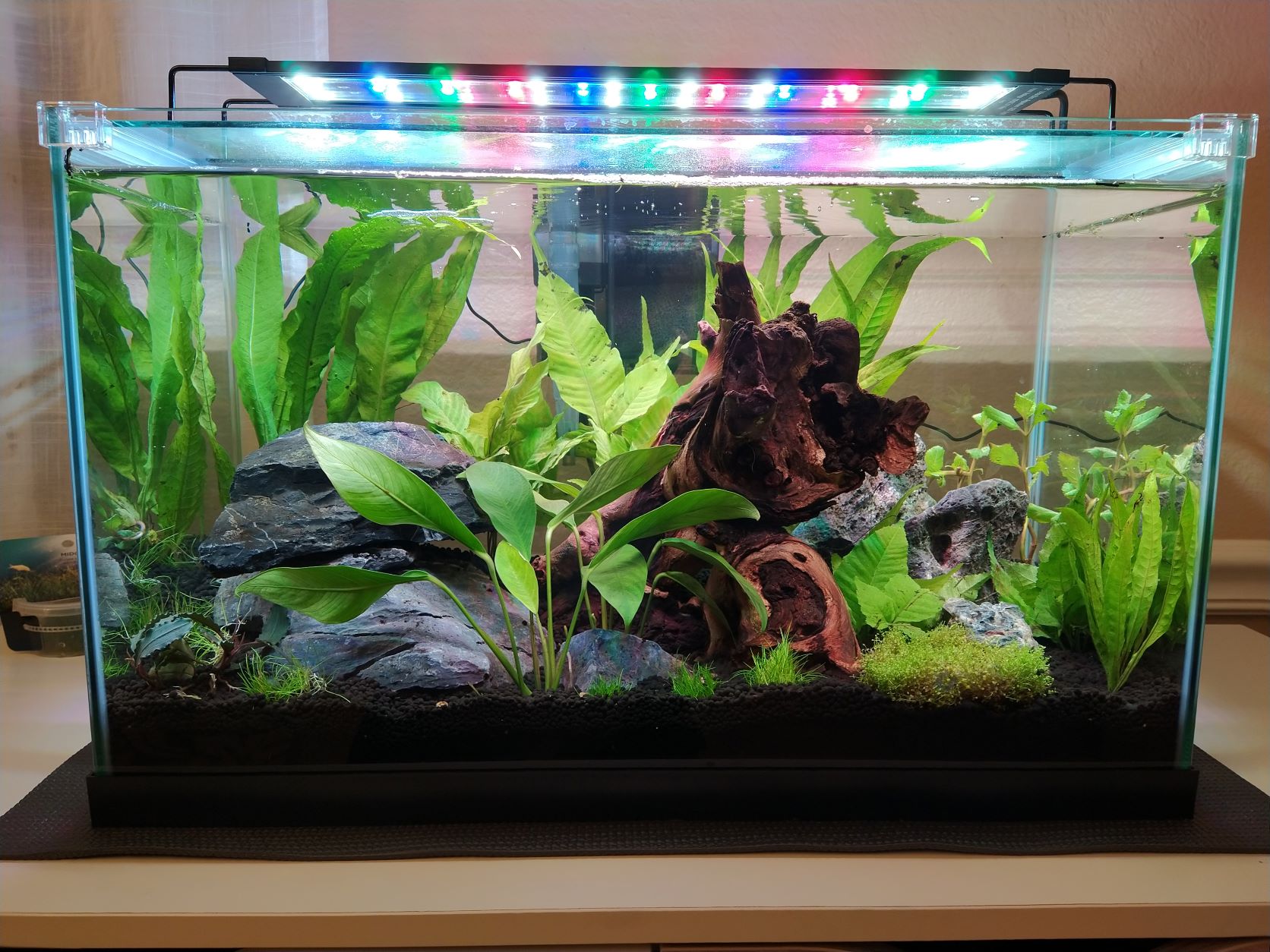 In the morning before work, I decided I should probably know a little about what plants I planted. So, I started looking them up. I learned a lot. For example, I learned one should not actually plant Java Fern, Asian Water Fern, B. Mercedes or Anubias in substrate. In particular, one should not bury the rhizome in the substrate or it will rot and the plant will die. You know… like I just did the night before. Ugh!

I also learned the proper way to plant the Cuba and Hairgrass.

So, though the water cleared up nicely, I would have to tweak a bit more. I ordered some ‘lead’ weights so that I could pull the plants up out of the substrate then put them back in nearly the same place, but on top of the substrate.

I pulled up all the plants with rhizomes (that I’d buried a few days ago) and attached the weights to keep them from floating around. I re-arranged things a bit to better hide where the weights were visible. I managed to muddy the water a bit doing so. 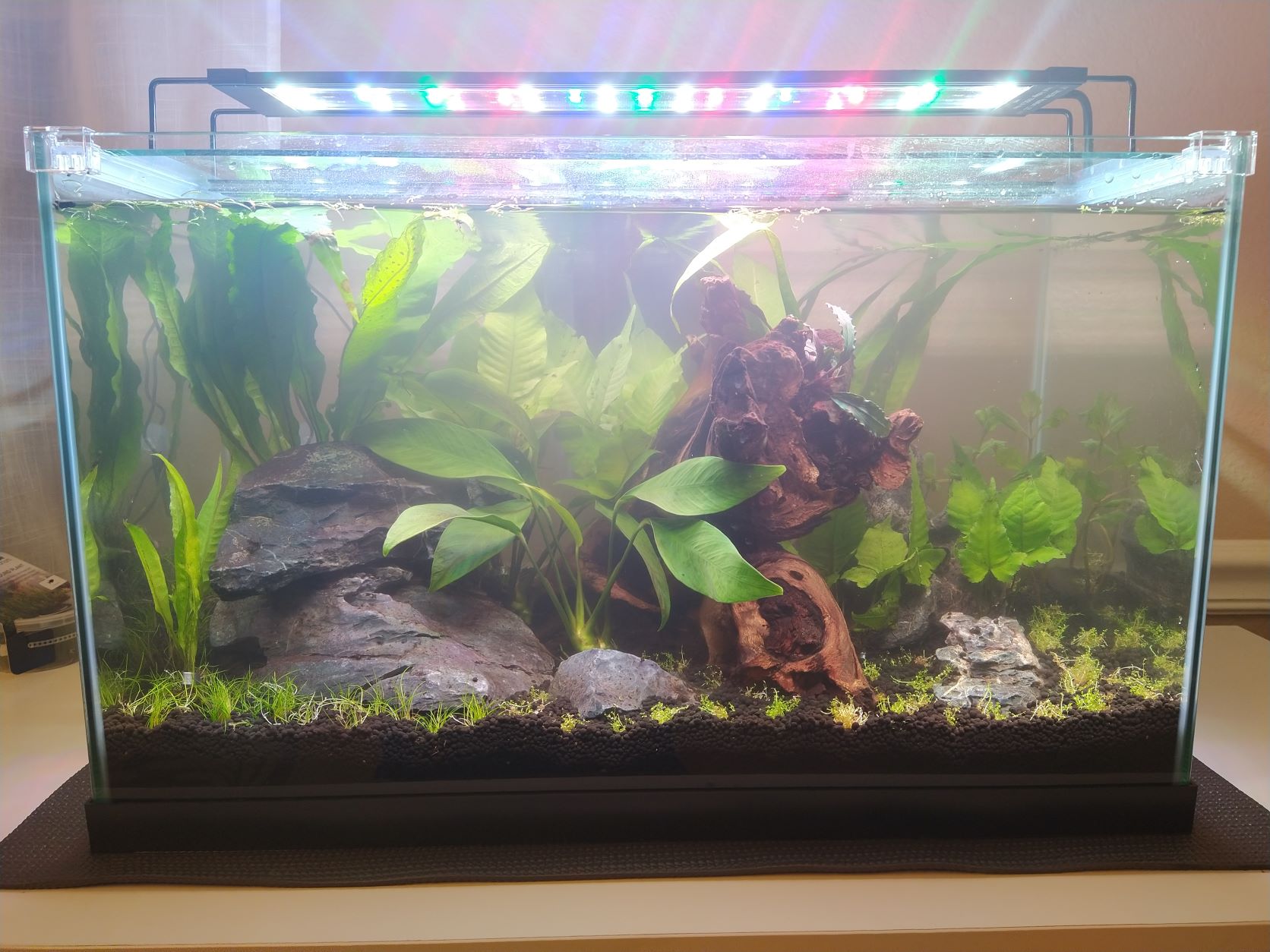 I measured those large Java Ferns in the back at Petco when I got them. Planted deep, they were going to be perfect. But now that they’re just sitting on top of the substrate, I think they’re just too tall. I’ll give the whole thing a few months to stabilize and for things to start growing before making any more changes. Maybe as younger leaves start to sprout, and I cut out these really long ones.

I also separated the Dwarf Hairgrass and Cuba into smaller plugs and replanted. My hope is that in 2-3 months they’ll fill in and carpet most of the bottom. Hopefully the grass on the left will grow tall enough to hide the visible weight on the small Java fern I moved over there.

When setting up the filter on this tank, I pulled some of the Fluval Biomax media from the old tank and used it instead of the new stuff. I also dumped in a bottle of Tetra SafeStart. Between the two, there should be a healthy amount of bacteria starting to colonize by now.

So… I think tomorrow, assuming the water clears and it still tests okay, will be moving day for at least one lucky (or unlucky) guppy.

I installed a new heater last night and this morning, the temperatures in the old and new tanks matched as did the water chemistry.

I moved the fish over. Then, when I started cleaning out the old tank, I found a fry in the filter. So I moved him too.

After a few hours of investigating, everyone seems to be happy and getting along.

Unless something major happens, I’ll update again in a month or so to report on plant growth progress.

Regarding the Removal of Audio from the Light Show Videos 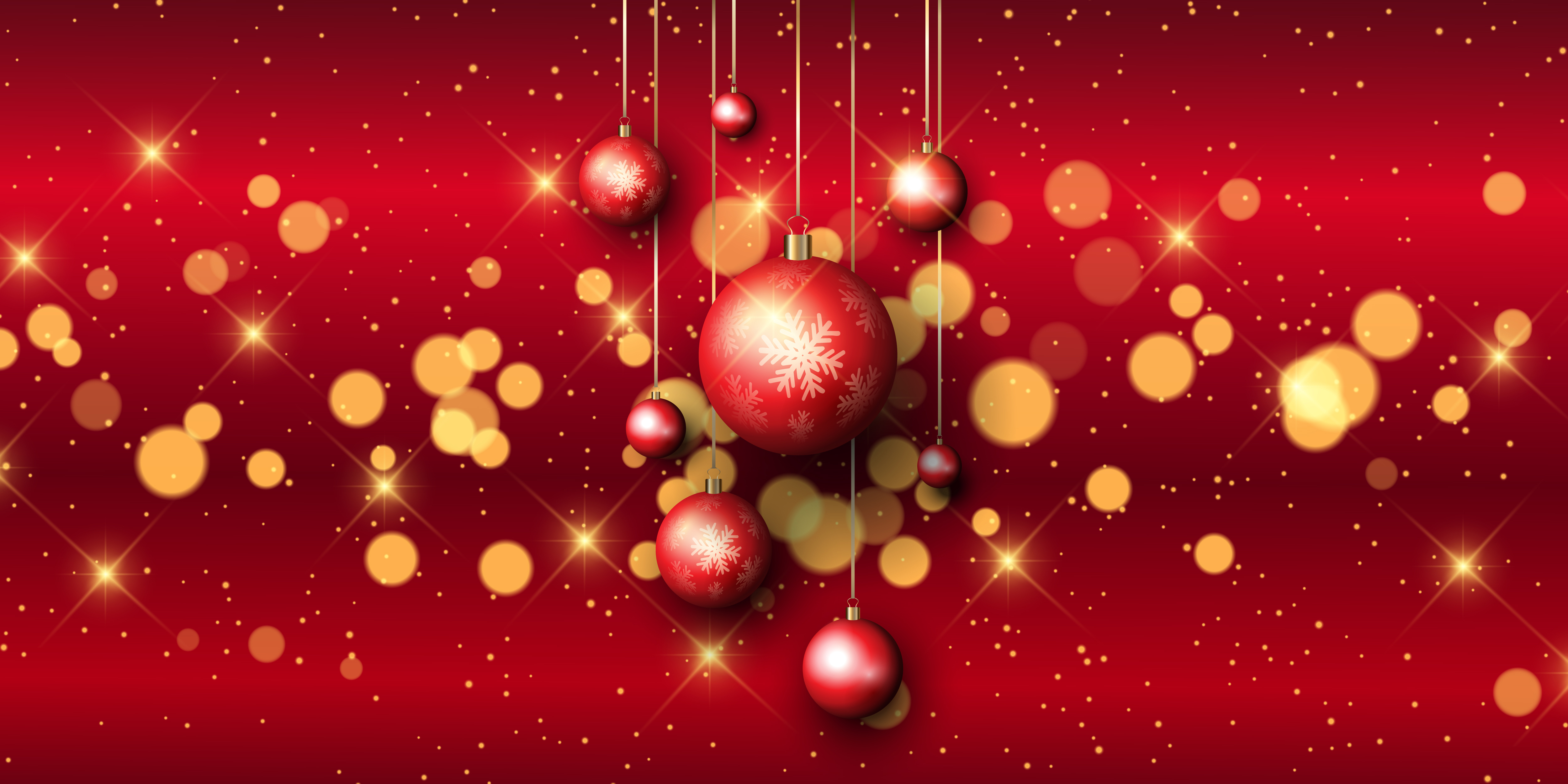 Bringing a little extra joy to your season! 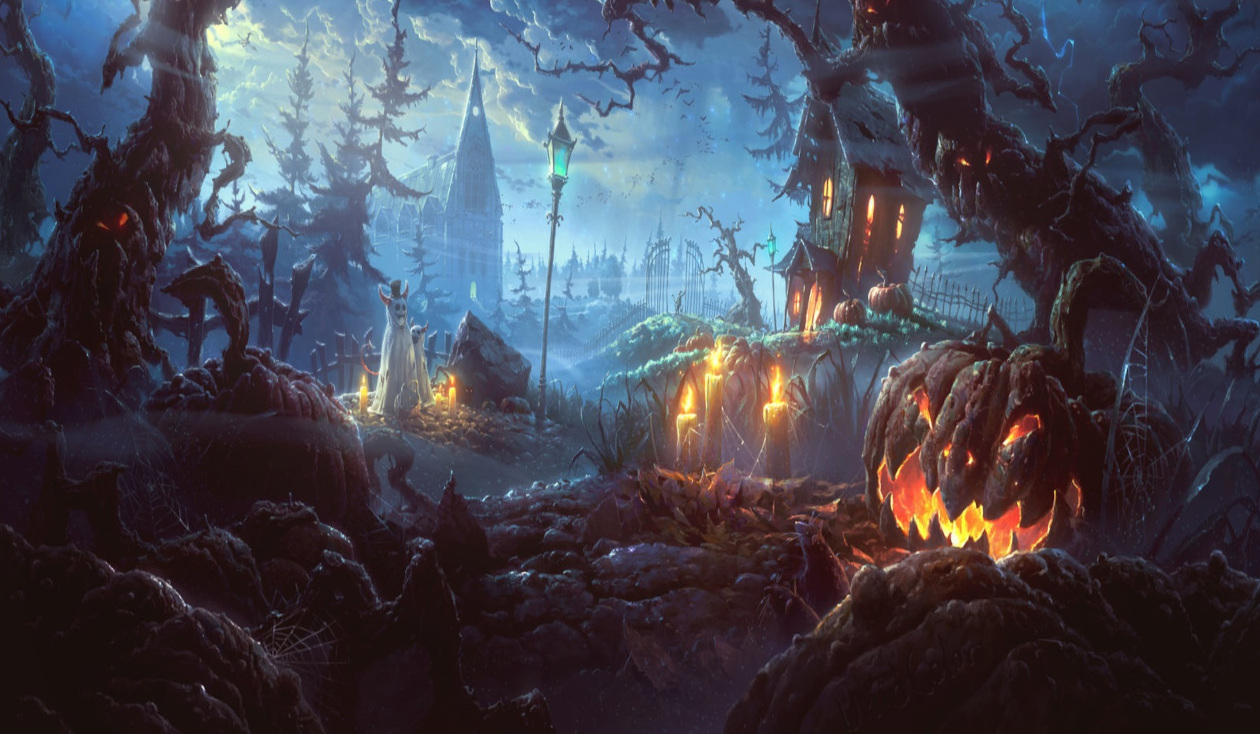 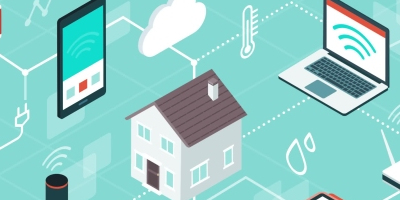